The vernissage of the SURVIVAL Art Review is in 17 days; below we present the [programme] and the [map] of this year’s edition! 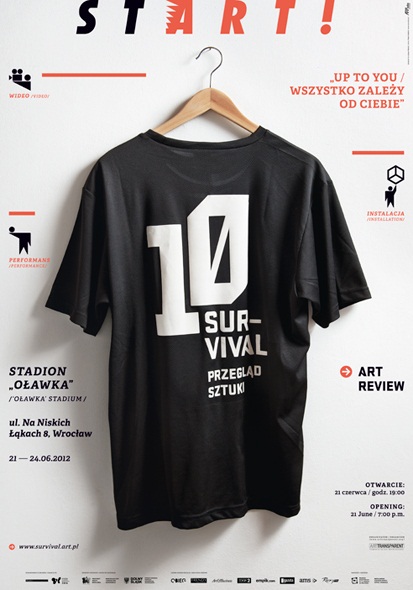 This year’s jubilee edition of the Art Review will take place at one of the stadiums in Wrocław. The venue, despite lying out of the way of the main city routes, is situated close to the centre.  In consequence of choosing a venue of this kind, the content of the tenth edition of the SURVIVAL Art Review will be determined by key words and phrases such as: competition, struggling for perfection, spectacle, games, collective experience etc. Sport and physical culture are connected with a wide array of notions and human desires: perfecting the body and the spirit, playing more or less fairly. Sport rivalry is primarily an opportunity to test and prove one’s skills as well as a chance to overcome weaknesses and inhibitions. Sport is also a collective experience and peculiar rituals – a spectacle, an enactment of a game. Therefore, the motto of the tenth edition of SURVIVAL – ‘Up To You’ – refers to broadly defined activity and the need for putting one’s abilities to the test.

Situating the tenth edition of the Review on the premises of a functioning sports centre will also take on significance in the context of the approaching EURO 2012 Football Championship. Contemporary sport, especially football tournaments,  is one of the most desired commodities on the global market, and the element of rivalry connected with it becomes evident as soon as countries and cities begin the competition for being the host of the most important sports events. The world of art is also being increasingly dominated by market rules. Some of the rules governing the world of contemporary art may resemble those functioning in the world of sport. Just like in sports games, in the world of visual arts there is competition and only few of the ‘players’ (artists) succeed in ‘coming top of the league’ and later defending their positions. The complex system of numerous competitions, often prestigious ones, fuels  these ‘artistic games’. The artists who take part in them become the ‘representatives’ of their countries, galleries, institutions, circles. The long-standing tradition of SURVIVAL, based on selecting only some of the art projects entered in the competition, also operates in terms of rivalry, choosing ‘winners’, i.e. authors of the most interesting conceptions. The deciding game, however, always happens when the artistic idea is carried out in live public space.

EURO 2012 is connected with the SURVIVAL Art Review in one more way… The media hype connected with the championship and subordinating the public space to it – i.e. turning public squares into fanzones, modifying temporarily the routes of the means of public transport to meet the needs of match-goers, a sharp increase in the prices of services and finally the ubiquitous rhetoric of fiesta and celebration (accompanied by tightened security measures) – will result in making the organization of  an artistic event in the public space especially difficult. The attention of even the most engaged members of the audience will be tested amid the noise of the tournament. It seems that the venue for the Review – a picturesque, but out-of-the-way, partially forgotten and slowly deteriorating ‘Oławka’ Stadium – will complement the situation and comment on it. It will become an enclave, a soap bubble, a venue for an alternative plein-air feast contemplating its own remoteness. Or maybe its powerlessness (in contrast to the sport propaganda of victory), all the more visible in the clash with the gargantuan machine of contemporary Olympics and the immortal rhetoric of bread (or coca-cola?) and circuses. On the other hand, it must be added, the venue will become rehearsal space for attempts that must be made until the logic and infrastructure of games take control over areas closer to art – in just four years’ time. Only the best and the most persistent will take part in the competition then. For it is all up to us, to you…?

Artworks made in many techniques: from installation to video to performance will be presented at the ‘Oławka’ stadium for four days.