‘Gospel of the Damned’ combines artistic approaches which correspond with radicalism in Pier Paolo Pasolini’s work, dealing with the exploration of the margin of –not only Catholic – denial. It is a special tribute paid to the Italian director. Events connected with the ‘Gospel of the Damned’ take place each autumn in the Mieszkanie Gepperta Art Gallery in Wrocław. The project was started in 2009. 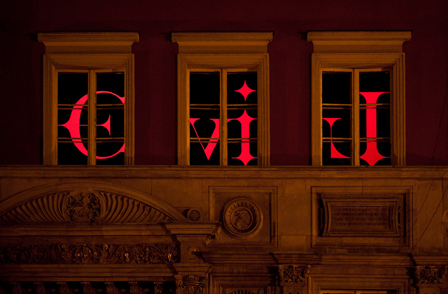 According to Borges’s deliberations (Osvaldo Ferrari, Jorge Luis Borges, ‘The Reencuentro – Dialogos Ineditos’, Sudamericana 1999), writing the fifth gospel, in literary terms an apocrypha on a par with its four predecessors, seems to be an impossible task, or one that would require sacrificing a whole life – in a sense, making an ‘offering’ of life. The death of the Italian artist Pier Paolo Pasolini, who was violently murdered in 1975 (probably due to his uncompromising political views and equally uncompromising artistic work – Pasolini died just before the premiere of the famous ‘Salo, or the 120 Days of Sodom’), could be understood as a final, tragic act of devoting one’s life to art – or one artwork – which Borges mentions. Pasolini’s work becomes synonymous with the term ‘gospel’ and takes on its functions because – being a poetic parable, a symbol, a hyperbole, an anecdote – it is also a political manifesto and a radical declaration. The literal reference to the original text and an attempt to tell it anew – that is, to reinterpret it – is crucial.

Pasolini’s ‘Gospel’ (or a gospel according to Pasolini) was written using especially the language of the cinema. Literal reading of the Biblical original was reflected most clearly in his three masterpieces of cinematography:  ‘La Ricotta’ (1962), ‘Gospel According to Matthew’ (1964) and ‘Theorem’ (1968). In these realizations, which refer to the Passion, traditional figures reveal their conventionality or take on a new depth, far beyond canonical regulations and ordering doctrines. Pasolini took away all their sacredness, their sanctifying aura, in order to show his own metaphysics derived from a consent to a terrifying randomness of the world. A feeling of such randomness permeates almost all the artist’s works, both film and literary ones.

The third part of the ‘Gospel of the Damned’ is devoted to the idea of ‘exegesis’, showing a possibility of an individual reading and interpretation of the ‘Scripture’ – thus experiencing personally the canonical test (i.e. a text which has become an order). The subject of ‘Gospel of the Damned part 3: EXEGESIS’ revolves around issues connected with the coexistence of individual ‘religious’ experience (which does not necessarily have to be connected with any ‘rite’, or a regulated ‘way’ of ‘professing’ a faith, but could be an element of the not-everyday life, in which a metaphysical experience is combined with experiencing the present moment, the passage of time, being entangled in social roles, sex, desire, attachment) and traditions and orders which regulate this experience (such as norms, rituals and doctrines).

Works of artists from Wrocław: Anna Kołodziejczyk, Maja Wolińska, Dy Tagowska, Łukasz Paluch and Michał Bieniek will be presented in the Mieszkanie Gepperta Art Gallery (and outside – in open urban space)
Curator: Michał Bieniek
Verrnissage: 10 November, 7 pm.
The exhibition will be open until 9 December; the gallery is open from Wednesday to Friday, from 4 pm. to 7 pm.
Mieszkanie Gepperta Art Gallery, ul. Ofiar Oświęcimskich 1/2, Wrocław