The vernissage of SURVIVAL 11 Art Review next Friday 21 June at 7 p.m.
We present the [programme] and [map] of this year’s edition. 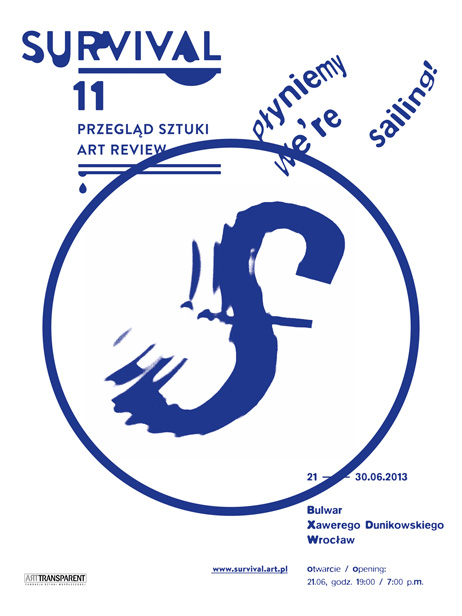 The eleventh edition of the SURVIVAL Art Review, held under the motto ‘We’re sailing!’, is dedicated to the presence of a river in cityscape. It provides an opportunity to ponder the function and meaning of the Oder in the everyday life of the inhabitants of Wrocław, to think about the human need to be close to water, the symbolism we attach to water and a river, and their role in nature and in an urban agglomeration.

Over 40 artworks will be presented during the Review, including installations, interventions in the existing space, sound installations, videos and performances. Several of the installations will be assembled directly on the water so that they can be seen during boat cruises on the Oder. Among such artworks will be Paweł Modzelewski’s ‘S.O.S’, which is a gigantic arrangement of life jackets, and a floating iceberg authored by Joanna Szumacher and titled ‘There and Back’.
The content of SURVIVAL 11 Art Review will revolve around universal notions concerning water: as a symbol of chaos, instability, changeability, transformation, healing, spiritual and physical rebirth, vitality. In the context of Wrocław, it is particularly important to subject the destructive powers of the element to artistic interpretation, to investigate natural disasters – floods, which largely determine the specificity of water-man-city relations. Embedded in this context are the works of Grzegorz Łoznikow (‘97’) and Agata Garbacz (‘I Feel Safe’, object-stronghold), both of which make use of sandbags.
The passage of time and the transformations of the environment, whose ‘archeology’ may be revealed by water, are the crux of Michał Sikorski’s installation ‘Memories Hill’. It consists of keepsakes from Breslau, collections of earthen pots, broken pieces, utensils found by the artist on Wzgórze Andersa. This artificial hill in the Huby housing estate is one of several dumps of rubble from buildings destroyed during the siege of Wrocław in 1945.
Layers, residue, coating and traces left by water are also the central theme of the installation titled ‘Borda D’Água/Water’s Edge’, authored by the Portuguese duo Luis Plácido Costa and Andreia Santana, as well as the corresponding work ‘No Water on the Other Edge’, which can be seen outside the main grounds of the Review – in the Mieszkanie Gepperta gallery.
During the 11th edition of the Review, several original artistic interpretations of a city fountain will be shown: Luiza Zimerman in her installation ‘Vibrating Waves’ will demonstrate how water may be shaped by modern technology, while Piotr Kmita, referring to the fashion for multimedia fountains, will present an ironic version of Duchamp’s famous fountain.
On 25 and 30 June two special events will be held outside the main area of the Review. The first one of them will be an installation under the title ‘Nothing More, Nothing Less’, assembled by Michał Smandek on the surface of the ‘Black Stream’ pond in Zacisze.
The work, situated in an old river bed of the Oder called Black Water or Black Stream (German: Schwarzwasser), will consist of glass forms – aquaria, placed by the artist in the pond – and use the physical properties of water, its buoyancy and pressure. Thus an arrangement of water solids will be created, which will not add or remove anything from the environment. In accordance with the artist’s intentions, the amount of water will always be identical, only its shape will change.
The second special event, which will close the 11th edition of the SURVIVAL Art Review, will be Jakub Słomkowski and Loïc Bertrand’s performance ‘Styx’ (30 June, Sunday, 6 p.m.). The performance, shown at the Morskie Oko bathing beach, is another part of the duo’s spectacle based on the idea of playing electronic etudes, composed by the artists, in the natural environment. The title Styx is the process of submerging, slow descend into the water with instruments, and a crossing of a kind, accompanied by a symphony of both synthetic and natural sounds.Curators of the 11th edition of the SURVIVAL Art Review: Michał Bieniek and Anna Kołodziejczyk, cooperation: Anna Stec
Sound Art Forum curator: Daniel Brożek
Video Lounge DOUBLE DREAM curator: Małgorzata Sobolewska
11th edition of the SURVIVAL Art Review: ‘We’re Sailing!’
21 – 30 June 2013
Vernissage: 21 June (Friday), 7 p.m.
Xawery Dunikowski Boulevard, Wrocław
www.survival.art.pl