We would like to thank all of you who participated in the eleventh edition of the SURVIVAL Art Review. More than 40 artworks were presented near Xawery Dunikowski Boulevard, accompanied by the Sound Art Forum events, debates and special events. Let us briefly look back on the ten days of SURVIVAL. 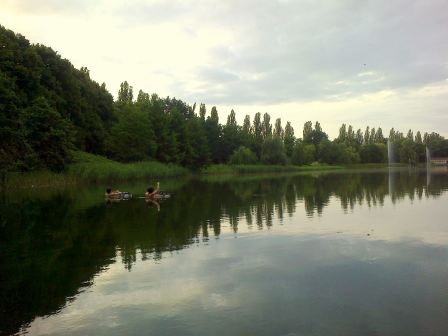 The eleventh edition of the SURVIVAL Art Review was opened on 21 June. The guests to the ceremony were welcomed by members of the ART TRANSPARENT Foundation, including the curators of the Review: Michał Bieniek and Anna Kołodziejczyk. The vernissage was honoured with the presence of important guests: Deputy Chancellor of Eugeniusz Geppert Academy of Fine Arts in Wrocław Ludwik Żelaźniewicz, Senator Jarosław Obremski, Director of the Department of Culture of the Municipality of Wrocław Jarosław Broda, and President of Wrocław Rafał Dutkiewicz, who was also Honourary Patron of this year’s edition.
Apart from the artworks, the guests to the vernissage could experience a combination of music and video art in the form of a live act entitled ‘The Marked Place’, performed by Wojciech Pukocz, Michał Sikorski, Kasper Minciel and Grzegorz Szustak.
On Saturday and Sunday there were curator’s guided tours of Xawery Dunikowski Boulevard. Since the motto of the eleventh edition of the Review was ‘We’re Sailing!’, many of the 40 works referred to water and the river. Some of them were placed directly on the water, including Paweł Modzelewski’s arrangement of life jackets titled ‘S.O.S’.
In the context of Wrocław, it was particularly important to subject the destructive powers of the element to artistic interpretation, to investigate natural disasters – floods, which largely determine the specificity of water-man-city relations. Embedded in this context were the works of Grzegorz Łoznikow (‘97’) and Agata Garbacz (‘I Feel Safe’, object-stronghold), both of which made use of sandbags.
Layers, residue, coating and traces left by water were the central theme of the installation titled ‘Borda D’Água/Water’s Edge’, authored by the Portuguese duo Luis Plácido Costa and Andreia Santana, as well as the corresponding work ‘No Water on the Other Edge’, which can be seen until 5 July outside the main grounds of the Review – in the Mieszkanie Gepperta gallery on Tuesdays, Thursdays and Fridays from 4 p.m. to 7 p.m.
Major controversy was stirred by Agnieszka Popek-Banach and Kamil Banach’s work ‘We’re Sailing’, and Michał Matuszak’s installation ‘Ophelia’. Szymon Hanczar’s installation ‘12m2’ fitted perfectly into the bank of Ostrów Tumski.
Thanks to the courtesy of Rector of Academy of Fine Arts Professor Piotr Kielan, it was possible to enter the premises of the Academy to see works, take part in debates and Sound Art Forum events.
During the 11th edition of the Review, several artistic interpretations of the city fountain were shown. Piotr Kmita made a comment on the fashion for multimedia fountains by assembling an ironic version of Duchamp’s famous fountain.
For the first three days of the Review, a series of videos selected by Małgorzata Sobolewska was shown on the first floor of the Academy of Fine Arts. DOUBLE DREAM featured artworks whose main subject was water in its many forms: rain, ocean, sea.
SURVIVAL is not just about works of art. An intensive cycle of debates accompanied the Review. This year’s discussions concerned the subject-matter of water, and some of them took place on a riverboat. During a two-hour cruise with Professor Adam Grobler, unique philosophical and culture-related tales about the river were woven amidst the picturesque landscape. There was also a meeting with a Catalan living in a boathouse, a discussion about the 1997 flood and its impact on the identity of the current inhabitants of Wrocław, and a discussion about the changes near the Oder and in the Nadodrze district with Bogna Świątkowska, Maja Zabokrzycka and Przemysław Filar.
This year’s edition was complemented by the Sound Art Forum, curated by Daniel Brożek. As part of it, workshops on field recording were held, and the inhabitants of Wrocław could enter into a dialogue with the soundscape and melosphere of the Oder banks. On Saturday invited artists (Marek Brandt, Paweł Kowzan + Konrad Gmurek, Paweł Kulczyński, Wojciech Kucharczyk, Gaap Kvlt, Gerard Lebik) presented compositions and sound actions which used frequencies close to natural ones, which were played from a boat sailing on the Oder and its canals. Many people were surprised by the compositions since they were in stark contrast with the usual sounds coming from river boats: party songs, loud and aggressive music. The main idea of this year’s Sound Art Forum was to present music which deliberately exists in harmony with the surroundings.
Finally, one could get a better understanding of the impact of nature on artworks. Due to unfavourable weather conditions, the presentation of Michał Smandek’s installation ‘Nothing More, Nothing Less’ was delayed. The work, which was situated in the ‘Black Stream’ pond, demonstrated not only the desired effect of changing amounts of water in glass containers, caused by the physical properties of water – buoyancy and pressure. The installation became also a measure of the changing water level in the pond.
The event which closed the 11th edition of the SURVIVAL Art Review, Jakub Słomkowski and Loïc Bertrand’s performance ‘Styx’, was another part of the duo’s spectacle based on the idea of playing electronic etudes, composed by the artists, in the natural environment. The title Styx was the process of submerging, slow descend into the water with instruments, and a crossing of a kind, accompanied by a symphony of both synthetic and natural sounds. Initially, viewers watched the artists disappearing under the cold water with apprehension, but eventually they focused on experiencing the unusual composition floating above the water.
Once again, we would like to thank everybody for your participation in the 11th edition of the SURVIVAL Art Review. We were pleased to see that it became an opportunity for active reception of the works, or even their spontaneous modification, as it was the case with Agnieszka Popek-Banach and Kamil Banach’s work. Toward the end of the Review, unknown passers-by modified the title inscription of the ‘Powodzi się’ (‘Flooding Us’) installation into ‘Pogodzi Się’ (‘Clearing Up’). Have a great weather and see you next year!

Artists participating in the 11th edition of SURVIVAL: