The opening of the exhibition within the second edition of the „Art with the Past” Festival – 17 November at 19:00 in the Mieszkanie Gepperta Art Gallery, ul. Ofiar Oświęcimskich 1/2, Wrocław. Presentation of works by Ciprian Muresan (Romania), Mare Tralla (Estonia), Adam Vackar (Czech Republic) and Piotr Kmita (Poland). 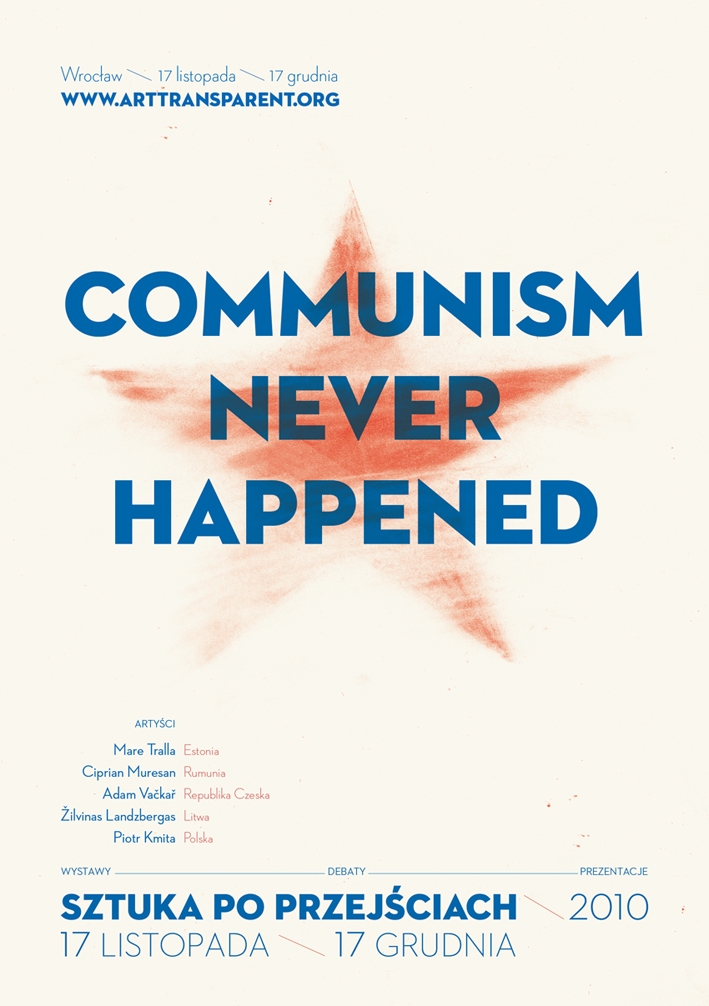 The title of this year’s exhibition within the ‘Art with the Past’ Festival is the title of one of the presented works. ‘Communism Never Happened’ by Ciprian Muresan is a writing (an announcement) whose letters were cut out of old analogue records. It could be a title of a music album some time back in the past or of a rock’n’roll evergreen… The work is in fact an ironic and very bitter contradiction, which consequently negates capitalism as a system that stands in opposition to communism. Since totalitarian communism has never happened, democratic capitalism has not come either… In contradiction to the propaganda of the new system the socio-political reality in the former Eastern Block countries remains still distant from the ‘democratic ideal’.

Artists: Mare Tralla from Estonia, Ciprian Muresan from Romania, Adam Vackar from the Czech Republic and Piotr Kmita from Poland address various issues connected with the theme of socio-political transformations of 1989 and their consequences. Intelligent and almost cruel in its simplicity commentary of Muresan referring to the freedom of choice which boils down to the possibility of choosing between Pepsi and Coca-Cola, comes into a dialogue with the general reflection of Vackar about the arbitrariness of systems represented by coded and seemingly permanent systems of signs, and with the remarks by Mare Tralla on the woman and femininity which is ‘trained’ and ordered by the socio-political situation, and finally with Piotr Kmita’s playful and to-the-point observations about the position of an artist in the conditions of the ‘new consumerism’.