The ART TRANSPARENT Foundation and the Academy of Fine Arts in Wrocław would like to invite for the opening of the exhibition “Hallo! Wrocław 2016! Connect. Divide”. The vernisage will take place on 18th September 2010 at 15:00 in the Neisse Galerie in Görlitz. Anna Kołodziejczyk and Łukasz Huculak, artists and young instructors from the Eugeniusz Geppert Academy of Fine Arts in Wrocław are responsible for the idea of the exhibition. Other artists involved: Kaja Marusińska, Dagmara Hoduń, Daria Milecka, Tomasz Opania, Michał Marek, Anna Kołodziejczyk and Michał Bieniek. 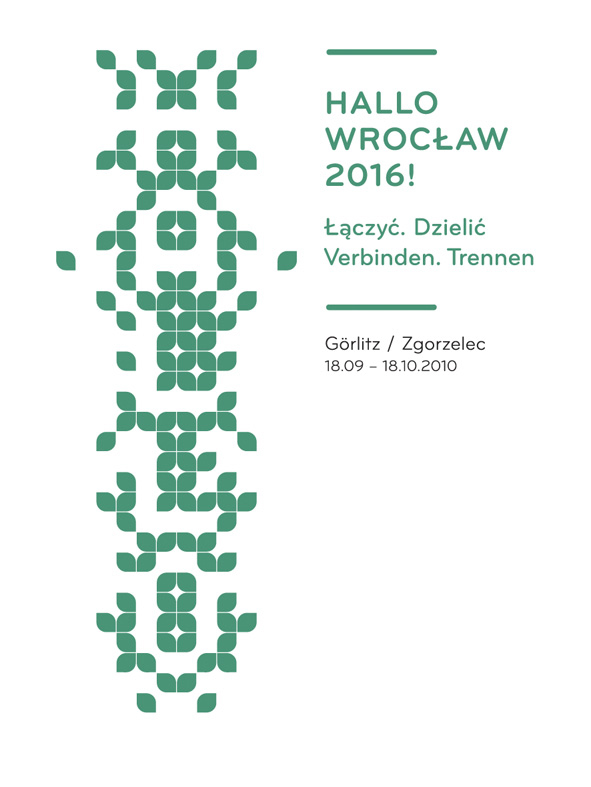 “Hallo Wrocław 2016!” Encompasses almost 30 projects aimed to present to the Polish and German audiences work of young artists associated with the Eugeniusz Geppert Academy of Fine Arts in Wrocław. All activities will take place in art galleries and public spaces of Zgorzelec and Görlitz. The chosen sites include for instance desolate empty buildings in the centre of Görlitz which make it possible for the art to be shown in unusual conditions – both because of its visual attractiveness and socio-historical background. Other sites include the Niesse Galerie in Görlitz and the Community Centre in Zgorzelec (an Art Nouveau building of a former museum).
The goal of “Hallo Wrocław 2016!” is to bring the societies of Poland and Germany closer through the strengthening of cultural connections, starting lasting cooperation between art institutions, artists and cultural animators that are active in both cities and countries.
Görlitz, a metropolis with a rich history which resulted in a rich architecture, a city of people who contributed significantly into the history of the European thought, nowadays has to struggle with economic and political results of dynamic macroeconomic and geopolitical processes.
In 1945 by the Potsdam treaty it was decided so that the Eastern, right-bank part of the city would belong to Poland. A difficult split of an urban and cultural tissue took place. A long process of settling down within an alien heritage began for new citizens of Zgorzelec.
Europe is a continent where borders have been shifted particularly often. Maps that remain a tool of national identification, lose their tangibility. The function of a border is to separate. Sometimes those lines are natural: something has its end, something begins. What found its end is not identical with the thing that follows. But it also happens that boundaries are imposed, do not cover the original structure of differences, but are politically designed. They create new divisions or – quite the opposite – negate those that existed before and were relatively natural.

The long lasting contacts between Zgorzelec and Görlitz resulted in the proclamation of the Europe City in 1998. This led to the creation of such conditions in which people, commodities and ideas can move easily, despite national and political differences.
The City of Görlitz/Zgorzelec – Europastadt – due to its particular geographic and social situation, typical of the whole region, can pose questions about the shape of the public space and its character which can often cause conflicts.
Both transgression and broadening of own space are a key issue for the art. Similarly, deliminating, forming, giving shape belong to its favourite methods.
For a couple of years due to centrally introduced regulations binding all members of the European Union, one can notice processes of transgressing, imposing and erasing in social contexts.
All those processes become a challenge for the contemporary art which for quite a long time has been interested in the category of the memory of a place.