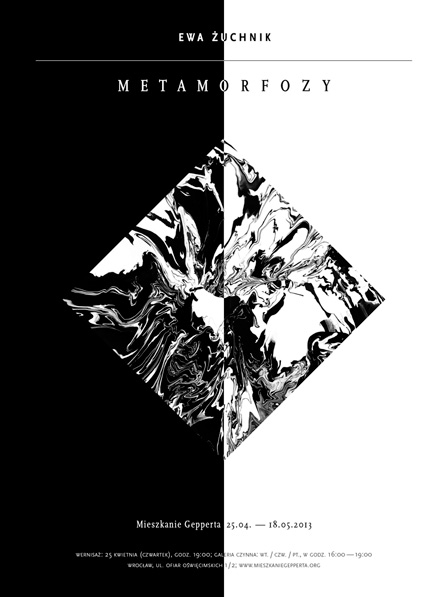 In her practice Ewa Żuchnik oscillates between sculpture and painting. Her works are characterised by virtuosity typical for a painter but paint is also her sculpting material. Just like a sculptor, she arranges the surroundings by making three-dimensional objects that daringly enter the gallery, bridging the gap between the work of art and the recipient. However, the originality of Żuchnik’s paintings-sculptures stems not so much from the works’ visual layer as their impact on the recipient’s mind, which transcends the physical frames.

Żuchnik’s works create in the viewer an irresistible feeling of movement, liquidity, volatility. The boundaries between the real world and illusion are blurred. The recipient is presented with an opportunity to experience art-in-progress, which brings up cosmological associations. The fascinating forms are being transformed almost before our very eyes. The frames of the object seem to be changeable and undefined. The whole escapes its fixed boundaries, smoothly transcending the real world to enter the invisible sphere of the mind and back – mysteriously ‘leaking’ our thoughts into the external world.

Restless matter freezes and is captured by Żuchnik as if in a photograph, only to come back to life somewhere between reality and the recipient’s mind. The rational judgment of the situation is contrasted with our imagination and visual illusion. That which is objectively known clashes with subjective impression. Thus a work of art is not merely the real constant matter, it becomes a tempting impression of liquidity and mobility. Although the impression exists only in our minds, Żuchnik endows it with a real form and physical properties.

For hot and cold were in one body fixt;
And soft with hard, and light with heavy mixt.

Ewa Żuchnik (born 1986) studied at the Faculty of Painting and Sculpture at Wrocław Academy of Fine Arts from 2007 to 2012. During her studies she experimented with painting techniques. She limits her colours to achromatic. She uses various materials. She creates expressive paintings, objects and installations.

She likes cooperating with the random. During the creative process she chooses to communicate with her inner self. She contemplates chaos. She is inspired by the natural energy of painting as well as by her aesthetic interests. She sometimes paints with her eyes closed, letting the painting commune with gravity.

She has presented her works at Galeria Miejska Arsenał in Poznań (Basic Life Functions), BWA Awangarda in Wrocław (diploma exhibition), Socato gallery in Wrocław (Fresh Blood), Wrocław Contemporary Museum (the Aviaries project ), at the Dzieduszycki Villa in Wrocław as part of the European Culture Congress (House of Change).

Curator of the exhibition: Anna Stec